William Lustig’s grungy, sleazy 1980 shocker Maniac is a classic, standing out among golden age slashers for its sheer grimness. Eschewing the good time teen slayings of the time, it instead served up terrifyingly disturbed psychopath Frank Zito (Joe Spinell) stalking and scalping women in New York, on the very streets where the film would have been showing. 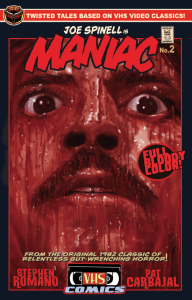 Thanks to the good folk at Eibon Press, we’ll be able to experience all of Frank’s mummy issues and self-loathing in print, with their comic adaptation of Lustig’s horror gem coming our way in 2017. Maniac will form part of Eibon’s VHS Comics line, which sees adaptations of VHS-era favourites released as standalone issues, packaged in VHS-style cases. Due to be released alongside Eibon’s comic of cult sci-fi weirdy Laserblast, Maniac was written by Eibon co-publisher Stephen Romano, with stunning artwork by Pat Carbajal.

“When we decided to do VHS Comics, we wanted two titles right out the gate that would land well with the fans,” Romano explains in the press materials. “We wanted something kind of campy and sci-fi fun for one of the books, which of course is Laserblast. But we wanted our second debut title to be really hardcore horror. And there’s nothing harder core in our opinion than Joe Spinell as the Maniac, man! 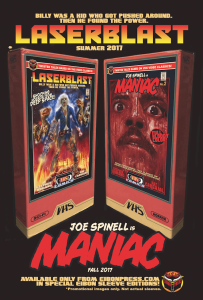 “It’s a killer classic of grindhouse grunge, and we’re working on a comic book that will shock the living shit out if everyone who gets an eyeful of it. If you thought the movie was horrifying, just wait’ll you get a load of this! It’s a real celebration of the film and a tribute to the amazing Joe Spinell, who was a true movie legend and a real inspiration to me personally over the years. He lived and died for his characters, and Maniac was his Rocky, as Bill Lustig often likes to say. Joe wrote the film and gave a career-defining performance as one of the sickest, rawest psychos in movie history. You see all that and a lot more in our comic book. The script covers the film, yes, but we really get in Joe’s head for some dark, dark trips that go beyond the film and into some truly squishy territory. It’s a total bloodbath, man. We were pretty big fans of the remake and all, but I think it’s time to remind people who the boss really is when it comes to being a maniac.”

Both Maniac and Laserblast will be available in limited runs next summer.