Classic Horror of the Month: The Hills Have Eyes (1977) 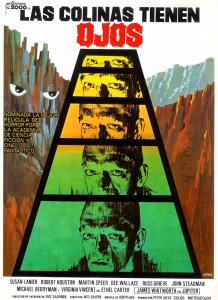 The grimmer-than-Grimm fairy tale that is The Hills Have Eyes finds the All-American Carter family, led by retired cop Bob (Russ Grieve), taking a wrong turn en route to California, skidding off the road onto a stretch of desert formerly used as a nuclear testing site. As the long night begins, they find themselves terrorised by Jupiter (James Whitworth) and his deranged family of inbred, cannibalistic fall-out mutants, and ‘Big Bob’ is the first to be claimed. A fight for survival begins that will see the remaining family members forced to revert to their own primitive instincts and meet savagery with savagery. 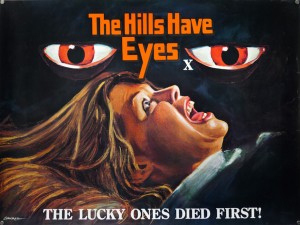 As with many of Craven’s films, Hills wryly critiques conservative White America and the nuclear family, which has here blighted the stolen land and created monsters in a skewed version of its own image. ‘Nice’ family leader Bob is a gun lovin’, God botherin’ casual racist, who has tellingly named one of his sons, Bobby (Robert Houston), after himself. The Carters stand in for a whole culture, reaping what it has sown after 200 years of the exploitation and violence hiding behind just beneath the surface of the American Dream. Just like Tobe Hooper’s The Texas Chainsaw Massacre (1974), a major influence on Hills, this was Craven’s ‘State of the Nation Address’.

Aside from all this, the film achieves a fine sense of mounting dread as the nightmarish situation unfolds, culminating in what can only be described as one goddamn exciting climactic twenty minutes. The minimal lo-fi score by Don Peake (a member of Barry White’s Love Unlimited Orchestra!) plays no small part in cranking up the dread. But it’s the manic turns from a young Michael Berryman as Pluto and Arthur King as Mercury that tend to stick in the viewer’s mind the most, along with the unexpected hero of the piece – Beast the Alsatian! Think you’re too old to root for a dog in a movie? Think again. 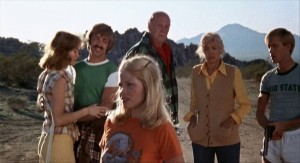 Although it sometimes comes close, Hills doesn’t go all-out for the squirm-in-your-seat excesses of Hooper’s film – Craven was still smarting too much from the industry stigma around Last House for that.  Instead he elects to turn the scenario into an ultra-violent action-adventure, and the mutoid villains are just cartoonish enough to avoid it being as close to the bone as the ‘everyday horror’ of his previous hit. However, to 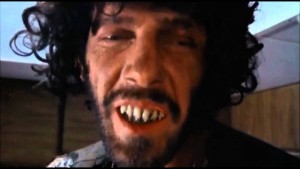 British moviegoers who never got to see the banned Texas Chainsaw and Last House until video came along, Hills must still have come as something of a shock.

Craven may have had much more amenable budgets to play with in his post-Elm Street career, but he rarely bettered the brutal sucker-punch simplicity of this gorgeously gruesome mini-epic.