Classic Horror of the Month: The Devil Rides Out (1968) 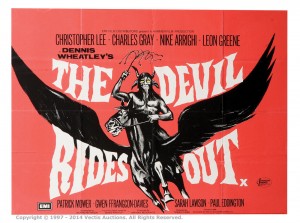 American author and screenwriter Richard (I Am Legend) Matheson wisely pared down Dennis Wheatley’s 1934 novel to its basics for this sumptuous Hammer production from director Terence Fisher. From the moment that James Bernard’s doom-laden score struck up, matched visually by a cornucopia of sinister occult symbols, audiences must have known that they were in for something different from the Studio that Dripped Blood’s usual fright fare.

Christopher Lee, a confirmed Wheatley fan who knew a thing or two about the Black Arts himself, lands a heroic role for a change as the Duc de Richleau, who’s more than a little perturbed to find that his young chum and fellow toff Simon (Patrick Mower) has thrown in his lot with a coven of Satanists led by the magnificently malefic Mocata (Charles Gray). Managing to extricate Simon and and a young girl named Tanith (Niké Arrighi) from their clutches, he and his friends find that war has been declared, with the powerful magus prepared to stop at nothing to return the two to his fiendish fold. 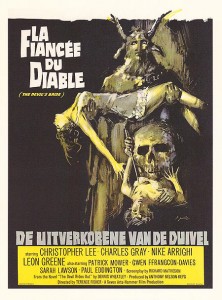 All the elements in place here: the tight plot structure, Bernard Robinson’s production design and art direction working wonders on a low budget, some great performances and James Bernard’s fabulous score all combining seamlessly to concoct a superior slice of high Hammer fantasy. If you have Lee on the side of the angels, then you’re going to need a villain of the same magnitude, and this we have in the form of Gray essaying the role of Mocata. The seasoned thesp has you glued to the screen whenever he’s on it, completely believable and oozing chilling malevolence.

In lesser hands, the first ritual scene in which we clap eyes on the very visage of “The Goat of Mendes – the Devil himself!” could have been risible, but under Fisher’s assured direction it’s suitably eerie. It’s just a shame that by necessity of the time it was made we find the acolytes’ orgiastic revelries toned down to a spot of boogying down, lessening the impact somewhat. The Satanic subject matter already had Hammer in fear of the wrath of the censors, so much so that the film’s production was stalled for several years.

There’s also, of course, the classic ‘magic circle’ scene, where the Duc and his allies come under a  sustained psychic attack from the fiendish Mocata. It’s been much noted, even by Lee, how the budget lets the film down in the effects department here, but it’s still ranks amongst the most memorable. Less talked about but just as chilling is the scene where Mocata comes to the house and nearly manages to exert his evil will over Marie (Sarah Lawton) and, foiled for the moment, declares “I won’t be back… but something will.” 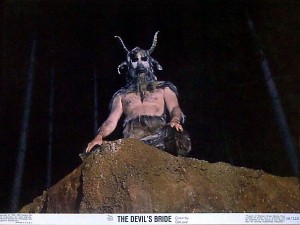 Wheatley loved what Hammer had done with his novel and so did Lee – you should too. It’s a pity that the same can’t be said of the studio’s later adaptation of Wheatley’s To the Devil a Daughter (1976), but we’ll just have to satisfy ourselves with this gem. One of the most solid entries in the entire Hammer canon and one of the jewels in the crown of British horror.