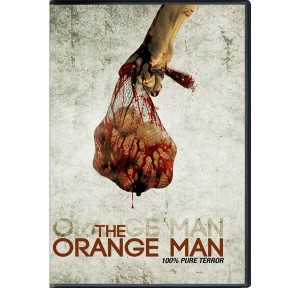 Indie horror has been treading some pretty weird paths of late, but few as odd-looking as that of Stephen Folker’s quirky slasher The Orange Man. With its brilliantly audacious tagline of ‘The most terrifying film of the century’, and a killer who wields a hook-hand and a bag of oranges, it looks to be one strange fruit indeed.

LeglessCorpse Films have just released The Orange Man on DVD in the US, as well as a Blu-ray which sports a seriously cool cover, but is limited to just 100 copies. A UK release has not yet been announced, but keep your eyes peeled (geddit, peeled? Aah, whatever).

Twenty-seven years later, land developer Gerald Johnson is acquiring an orange grove. Just served with divorce papers, he convinces his quirky friends (Wilbur, Reggie, Jimmy) to join him on a fishing trip to clear his mind and finalize his business transaction. Unbeknownst to him, his soon-to-be ex-wife Deborah and her boyfriend Roger will be vacationing in the same location.

The following day the group arrives at a quaint and secluded cabin. It’s not long before strange noises in the night start to get the attention of Reggie, Gerald’s wheelchair-bound friend and the only one with any common sense. Gerald, thinking it’s nothing, brushes his friend’s concerns aside. Soon, Reggie’s fears are confirmed when he catches a glimpse of the ‘Orange Man’ while fishing.

As the plot thickens, the Orange Man slowly and methodically begins picking them off one by one, utilizing his prosthetic hook hand and a sack of oranges, The Orange Man wants everyone to have a taste.

Check out the trailer for this ‘pulp’ horror below.