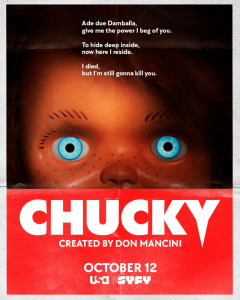 SYFY also shared a short teaser video over on Twitter that similarly evokes the Anthony Hopkins-starring film. In it, Chucky (voiced once more by Brad Douriff) warns us that even though he died, he’s still gonna kill us…

Original Child’s Play creator Don Mancini is behind the series, which will see a vintage Chucky doll turning up at a suburban yard sale, throwing an idyllic American town into chaos as a series of horrifying murders begin to expose the town’s hypocrisies and secrets. Meanwhile, the arrival of enemies— and allies—from Chucky’s past threatens to expose the truth behind the killings, as well as the demon doll’s untold origins as a seemingly ordinary child who somehow became this notorious monster.