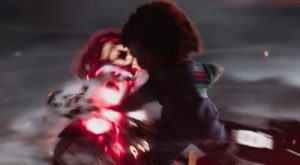 When the first trailer for Steven Spielberg’s Ready Player One appeared out of Comic Con earlier this year, its collision of pop culture iconography caused nerdgasms for many and inevitably, a little cynicism in others. With references to everything from Akira to Back to the Future to The Iron Giant though it sure got everyone intrigued. Impossible to ignore also, was that little glimpse of a certain Freddy Krueger and, as seen in the brand new trailer, he’ll not be the only slasher icon to make an appearance.

Having made his triumphant return this year in Cult of Chucky, everyone’s favourite knife-wielding, psychopath-possessed doll pops up in the trailer, albeit very briefly. You can see our ol’ pal Chucky kicking some ass around the 2:14 mark.