Chuck Steel: Night of the Trampires to Land This Year 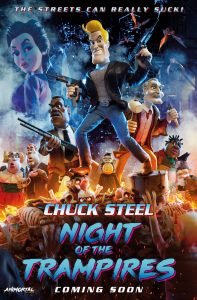 We caught wind of Chuck Steel: Night of the Trampires last year and we’ve eager to hear more about it ever since. Chuck Steel first burst on to our screens in 2015 with the 14-minute short Chuck Steel: Raging Balls of Steel and it was an epic stop-motion short. Blending both humour and gore, it’s our favourite type of horror-comedy perfection.

It’s no longer 1985 – it’s 1986, and Chuck Steel has work to do if he is to prevent the worst plague ever to hit Los Angeles – a scourge of deadly Trampires, mutant hybrids of vampires and bums.

You can check out the brilliant teaser trailer for Trampires below, which gives you an idea of the crazily high-concept bum-vampires that plague the city. The production value is almost unbelievable, so we can’t wait to see it extended to a full-length feature.

Written and directed by Michael Mort, Chuck Steel: Night of the Trampires will hopefully be with us this year!