Get ready for more traps, more twists, and more gore. Lionsgate and Twisted Pictures are creating a spin-off to the Saw franchise—and actor and comedian Chris Rock is behind it.

Last year, it was reported that Jigsaw writers Pete Goldfinger and Josh Stolberg were already penning the screenplay for the next instalment. Turns out, the idea for the story came from Rock himself, who has been a fan of the franchise since the very first film. 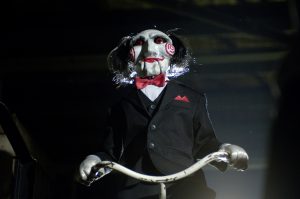 The news of Rock’s involvement broke at this year’s Cannes Film Festival. Rock’s direction for the franchise is said to be reverential while still bring a fresh perspective to the brand. Long-time Saw producers Mark Burg and Oren Koules will return to produce, with Rock executive producing alongside James Wan, Leigh Whannell, and Daniel Heffner.

The film is targeting an October 2020 release, so we expect to hear more news from the project very soon.