Chopping Mall to be Remastered for Blu-ray

Shopping is set to cost you an arm and a leg once again, because Chopping Mall is heading to Blu-ray. Vestron Video is releasing a limited amount of copies of the slasher that follows a group of teenagers trapped in a mall with malfunctioning security robots. We don’t get wonderfully bizarre plots like that nowadays, do we?

Chopping Mall will be the first in a series of classic films that are being remastered and re-released for genre fans and collectors to enjoy. Along with a high-definition copy of the film, the collection will feature the following special extras: 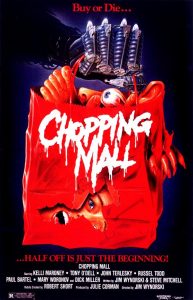 You can grab a copy of Chopping Mall on 27th September 2016. Be quick, because they won’t be there forever!