Synopsis:
Lance Reed is forced by a psychotic stranger to confront his duplicitous past. Seeking retribution for a crime, the man forces Lance to reveal his inner most secrets by systematically removing his limbs.

The name Trent Haaga will certainly ring bells for many of you with him having penned Deadgirl and, more recently, the dark and dexterous Cheap Thrills. Although not quite in the same ballpark, Chop certainly shares a whole lot in common with Cheap Thrills and fans will appreciate that.

Both films explore the deepest, darkest recesses of human nature and our capacity to commit the most heinous of acts, all for the sake of love or revenge. Whilst Chop flings the protagonist, Lance, straight into choosing between saving his wife or his brother, the film ultimately settles firmly into revenge thriller territory. Think Prisoners, Seven Days and King of the Ants with hearty helpings of the pitch black humour of Cheap Thrills or Kevin Smith’s recent body horror, Tusk and you get the picture.

With that said, Chop obviously needs to be taken at face value – a horror comedy with Haaga’s tongue pressed so firmly against his cheek it hurts – or you’ll just be missing the point. Could this be why Tusk is getting so much of a panning? Probably. (Personally, Tusk gets a big flipper clap from me). Haaga’s been in doing low-budget Troma since forever and his followers know what to expect. Couple that with Adam Minarovich’s script and Chop is about as Tromatastic as they come.

Everything is steeped in hyperbolic characters and whilst the acting may come across as wooden at first, I soon realised this was the best mahogany money can buy. Harking back to the golden days of cult classics such as Street Trash and Slime City, this homage to the ’70s and ‘80s is even further enhanced with Matt Olivo’s choice soundtrack that fits this old school vibe like a glove – even when fingers start coming off.

The two leads, Will Keenan (Lance) and Timothy Muskatell (the Stranger) both chew up the scenery in every overblown way possible. The same can be said of the supporting cast with the tour de force being a disgustingly outlandish performance from Jeff Sisson. Let’s just say his scene does for Chop what the Gimp and Zed did for Pulp Fiction.

In terms of editing, the film does jump all over the place and gets particularly Requiem for a Dream-esque in places but it’s particularly effective in surprising the audience each time Lance awakens after umpteen tranquiliser shots. Moreover, for a film focusing on two lead actors playing off each other, Haaga wisely packs in a plethora of curveballs – some you’ll see coming, but most you probably won’t. Something that has received a gripe or three is the film’s climax and I can understand this to some extent. That said, given the jocular tone of the whole affair, I found it to be a fitting and satisfactory culmination.

To chop a long story short, poor old Lance might be losing his fingers but this film gets both thumbs up from me.

Chop is available exclusively in NOW at TheHorrorShow.TV here http://thehorrorshow.tv/movie-display/chop-2011 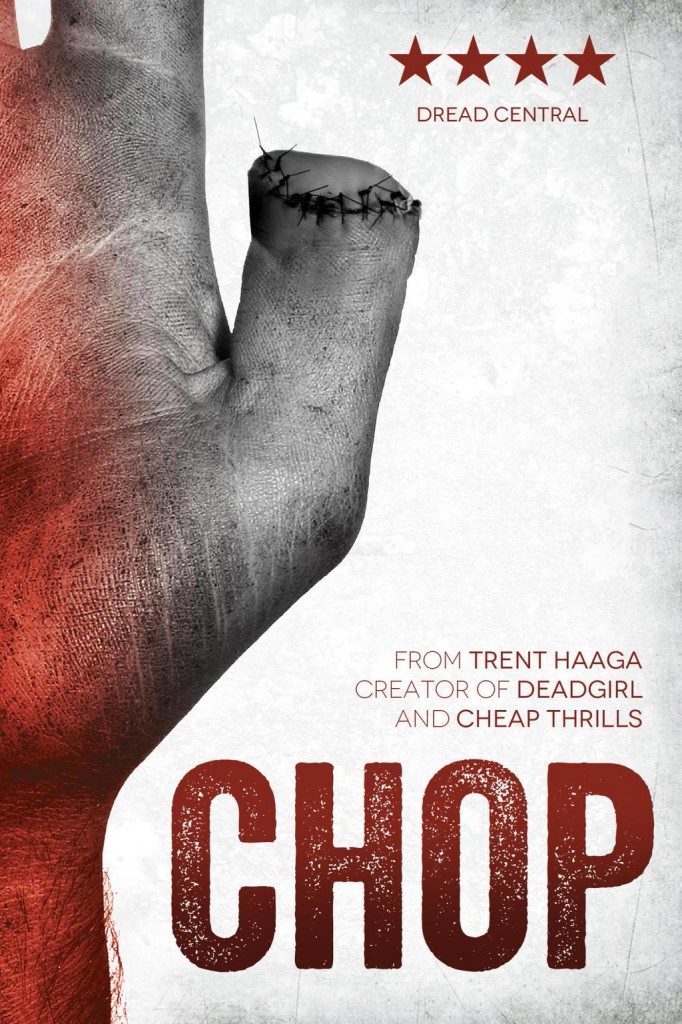