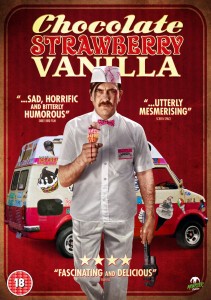 Synopsis:
With a psyche damaged by years of bullying and pent up aggression, a lonely ice cream man finds solace in a Neighbours-like soap opera and its young leading lady.

Eeesh, you wait for what seems like forever for another psycho ice cream man flick and then two seem to come along at once; well, almost. But, less than two weeks after the announcement of ICE CREAM MAN: SUNDAE, BLOODY SUNDAE – the belated, crowdfunded part two to the 1995 clag favourite – and fresh from last Saturday’s early morning slot at Sheffield’s Celluloid Screams, comes this; the impressive, low-key Aussie indie CHOCOLATE STRAWBERRY VANILLA.

Snarky thematic comparisons aside, the bitter-sweet Chocolate Strawberry Vanilla couldn’t be anymore different to the aforementioned, original Clint Howard-starring schlock vehicle. Though both share a similarly rich vein of dark humour, director Stuart Simpson’s thoughtful and surprisingly effective character piece is more an upsetting psychological drama than a game-but-lame cornball slasher film. In truth, it’s not even really a full-on horror movie although it is, at times, quite horrifying. It’s NAPOLEON DYNAMITE by way of TAXI DRIVER, perhaps; an offbeat comedy on one hand, and a harrowing dissection of loneliness on the other. And just as those were anchored by striking central turns, so too is Chocolate Strawberry Vanilla, with star Glenn Maynard (who also co-produces) its powerful emotional core as gimpy-legged, unstable ice cream vendor Warren. Chalk it up alongside Essie Davis in the good but overhyped BABADOOK and Bill Oberst Jr. in the deliciously repellent CIRCUS OF THE DEAD; it’s one of the strongest lead performances of the year.

Complete with greasy, side parted hair and, of course, the requisite creepy moustache, Maynard’s Warren is both hilarious and heartbreaking, his mental disintegration mirrored by the mounting pile of untouched food dumped in his recently deceased pet cat’s bowl. Kyrie Capri, meanwhile, is Maynard’s equally excellent counterpart, her soap starlet Warren’s apparent salvation, but ultimately just as damaging as those Warren speaks of in his video diary; the entries of which twist from initial, excitable trains of thought to dark, wound-opening confessionals.

Sadly, the use of such a hoary narrative device is where the film really falters. And, as they did in homegrown director Geoff Harmer’s solid, close thematic cousin ADDICT, Chocolate Strawberry Vanilla’s to camera pieces again feel out of place; a slapdash addition at odds with the rest of Simpson’s meticulously controlled yet minimalistic and improvisational-feeling style. Thankfully though, it’s a misstep that’s easy to overlook as the rest of the film is so well rendered; from Addison Heath’s pathos strewn script, to Simpson’s imaginative realisations of Warren’s pop culture influenced fantasy land, and his own vibrant cinematography. Lovers of the horror left field, or those just looking for a refreshing change, would do well to seek this one out when it hits disc on Monday 10th of November, via Monster Pictures.