Last month it was announced that a film called Beware The Slenderman would be making its world premiere at SXSW Film Festival in Texas, but very little was known about it. We knew it would be based on the iconic character that first appeared on the Something Awful Forums back in 2009, but that’s about it.

Now, we can reveal that Beware The Slenderman is, in fact, a documentary from HBO! It will focus on the real life incident that saw two 12-year olds stab their best friend 19 times in the hope of pleasing Slenderman. Crazy.

Synopsis:
BEWARE THE SLENDERMAN tells the story of the internet’s elusive Boogeyman and two 12-year-old girls who would kill for him. Morgan Geyser and Anissa Weier lured their best friend into the woods, stabbed her 19 times, then set out on an odyssey to meet the tall and faceless man known online as Slenderman. Shot over 18 months with heartbreaking access to the families of the would-be murderers, the film plunges deep down the rabbit hole of their crime, a Boogeyman and our society’s most impressionable consumers of media. The entrance to the internet can quickly lead us to its dark basement, within just a matter of clicks. How much do we hold children responsible for what they find there? 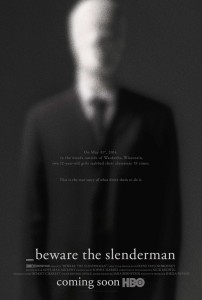 You can check out the poster for the documentary right here. Beware The Slenderman’s concept sounds absolutely fascinating. We can’t wait to hear what conclusions the film draws when considering who is truly responsible for the children’s heinous crime. The idea of looking at the dramatic effect of imaginary horror characters like Slenderman can have, will probably open a door that many will wish stayed shut.

Beware The Slenderman will come from the Oscar-nominated and Emmy Award-winning filmmaker Irene Taylor Brodsky and has a release date slated for 2016.