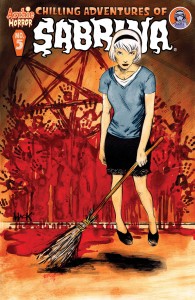 Afterlife with Archie, Roberto Aguirre-Sacasa’s gothic take on Archie Comics, was one of the highlights of the year for me when it debuted in 2013. By combining the classic Archie style with the darker elements of horror, Aguirre-Sacasa created something that felt both fresh and exciting, while Francesco Francavilla’s Dario Argento-esque art lent the book a potent, heady quality. When it was announced that Aguirre-Sacasa would return for the spin-off title The Chilling Adventures of Sabrina, I couldn’t have been more thrilled. Issue #5, released this month, is a bewitching concoction of Satanism and blood magic – a perfect antidote to readers tired of seeing witches reduced to black lipstick-wearing teenagers.

In the last issue – released almost seven months ago – Harvey had caught Sabrina partaking in a satanic ritual in Greendale woods. In one of the comic’s more memorable sequences, he was then seduced by Madam Satan and eaten alive before the coven. Issue #5 takes place in the immediate aftermath, with Sabrina being tried for her commitment to the witches’ council. Though she seems loyal, she secretly continues seeking out a way to bring her boyfriend back from the dead, even though it seems she’s playing directly into the hands of Madam Satan herself. With appearances from Archie favourites, Betty and Veronica, issue #5 maintains the quality of the subsequent four issues, ending on a deliciously unexpected note. Thankfully we won’t have to wait so long for issue #6.

Roberto Aguirre-Sacasa has a talent for writing deceptively simple narratives. Though incredibly fast-paced and readable, there’s a lot going on beneath the surface of Sabrina, and the comic is one that certainly rewards being read multiple times. Though it’s a fun book, referencing everything from Carrie to Creepshow, it’s also an intelligent one, posing some interesting questions about what it means to be an outcast of society. The witches here refuse to be shamed for their beliefs, frequently subverting the dominant male views of sex and power. Though set in the 1960s, these women are anything but domestic.

Robert Hack’s artwork is scratchily illustrated – a perfect combination of the animated source material and the darker elements of the narrative. Faces are often lit moodily from below, giving the book a strange, nightmarish quality. The backgrounds, rendered in broad, sketchy brushstrokes, are suitably dark and gothic; and the muted brown-and-orange colour palette lend the book a sad and elegiac aspect. 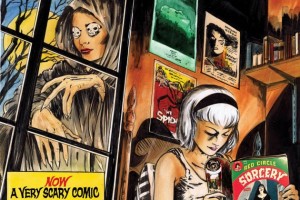 Issue #5 of The Chilling Adventures of Sabrina is another brilliant addition to the Archie Horror label. Equally funny and horrifying, the book also serves as an interesting take on witches – especially as they are so often reduced to pious victims or ancient hags. Although I have no idea where the book is going next, I have every faith in Aguirre-Sacasa’s abilities to make Sabrina as shocking and powerful as his work on Afterlife with Archie. Though I knew it from the first issue, I remain firmly under the writer’s spell.