CHILDREN OF THE CORN: Film Review 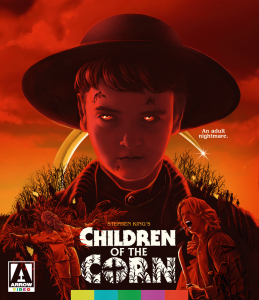 Children of the Corn, released in 1984, followed a string of hugely successful King adaptations, including Carrie (1976), The Shining (1980) and Salem’s Lot (1979). In today’s political climate – in which more and more people are driven to religious extremism – I thought now would be the perfect time to revisit Children of the Corn, looking at the way in which the film deals with ideas of mass hysteria and religious brainwashing.

Trying to salvage their ailing relationship, Burt and Vicky (Peter Horton and Linda Hamilton) decide to drive to California, but get side-tracked when they hit a child standing in the middle of the road. Looking for help, they soon find themselves in the small town of Gatlin, a town in which a cult of children have ritually killed off all of the adults, offering them up to a deity known only as ‘He Who Walks Behind The Rows.’ This cult, led by the deliciously fiendish Isaac (John Franklin), soon begin calling for Burt and Vicky’s blood, leading to an apocalyptic showdown in which the couple must destroy the demon once and for all.

Stephen King wrote the original draft of the screenplay, which was eventually rejected in favour of one written by George Goldsmith. It is clear that there was no love lost between the two, with Goldsmith arguing that King didn’t understand the format of cinema, and that his script wasn’t visual enough to work on screen. This may or may not be true, but ironically, Goldsmith’s script is uniformly flat and one-dimensional. Character development is largely rejected in favour of long-drawn out action sequences, and the plot is stretched so thin that it feels much longer than its 92 minute runtime. Rather than building on the themes and ideas of King’s original story, Goldsmith’s script is often shallow and vacuous, and the film may have benefitted from having slightly less of his ‘cinematic’ ideas.

Another problem is that the film never focuses much time on the cult. We see endless shots of Malachai calling for Burt’s blood, and children blindly praying in the cornfields, but the glimpses we get into their religion is by far the most interesting thing about the film. In one scene, Burt interrupts a religious ceremony, in which the teenage Amos (John Philbin) offers himself as a willing sacrifice to their God. The children have taken the Christian Bible and adapted it, reinterpreting it to fit their needs. This is an interesting idea, but the film shies away from ever taking a stand, rejecting the opportunity to criticise organised religion. Of course, the subtext is fairly blatant, but the film could be strengthened by making those connections more overt, examining zealotry in a deeper, more psychological way.

Similarly, Goldsmith’s refusal to ever make much of a point leaves many questions unanswered. We never find out why Isaac decides to kill the adults in the town, or how he manages to brainwash the other children; we never find out anything about He Who Walks Behind The Rows or what he wants with the people of Gatlin. But the worst sin that the movie commits is just how patronising it is to the audience. It would be far more effective as a story about mass hysteria and religious proselytising than some monster who lives under the ground – we see it moving about beneath the cornfields – undermining some of the more psychological aspects of the film. The same thing happens in the opening scene of the movie, in which we’re treated to a rather saccharine flashback of the adults being killed. Rather than allowing us to find out what has happened to Gatlin as Burt and Vicky do, Goldsmith tells us right away, destroying the tension that could have been built up more organically. 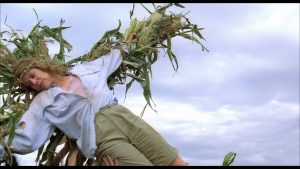 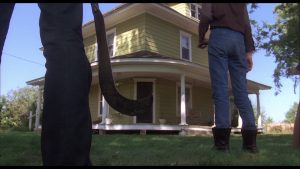 But that’s not to say that there isn’t much to enjoy in Children of the Corn. The child actors all do a decent job with the material provided, and John Franklin is fantastic as the leader of the cult. Jonathan Elias’ score is by far the scariest thing about the movie, layering washes of strings and synths over the eerie sounds of children singing. Admittedly, it’s not particularly subtle, but it’s campy and fun, and keeps the film moving along while the characters stumble around, looking desperately for any semblance of plot.

The annoying thing about Children of the Corn is that the film has the potential to be great, but Goldsmith’s script and the rather functional direction make it feel more like something made for TV. King’s script – which supposedly started with 36 pages of Burt and Vicky arguing in a car – would have been far more interesting and involving than what we end up with here: something far more rote and sentimental than any other King adaptation. For those with a taste for ritual murders and faux-Biblical imagery, you could do worse than choosing to watch Children of the Corn, but if you’re looking for something more than a trashy, forgettable romp through the cornfields, you might be better off looking elsewhere.