Children Are from Hell in the Poster for Malicious

A new poster has been unveiled for the supernatural horror Malicious and it tells us that children are gifts from hell. In the film, a couple’s life is turned upside down when they accidentally release a malevolent entity. We’ve all been there. 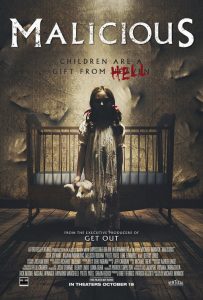 The film comes from writer-director Michael Winnick, who has also directed The Better Half and the upcoming Blood Land. Malicious stars Bojana Novakovic, Josh Stewart and Delroy Lindo.

If the premise has you intrigued, then check out the trailer below. It shows a housewarming gift turning sinister, but doesn’t show us anything scary that we haven’t seen before. It seems like a wasted opportunity, but I don’t want to judge a film before I’ve seen it. Difficult though, isn’t it?

Malicious will be released on 19th October.