You’d be hard pressed to find a Friday the 13th fan who considers Jason Goes to Hell: The Final Friday one of the franchise’s highlights. Indeed, it usually ranks close to dead last, just above Jason Takes Manhattan and Jason X (the one where Jason goes to space). Still, the film directed and co-scribed by Adam Marcus is objectively the most creative and out-of-the box instalments, and it’s built a cult following in the years since its release. You may have hated the body-jumping sprit of Jason Voorhees, but there’s something subtlety exquisite about The Final Friday.

A new documentary is in the works that intends to delve deep into Jason Goes to Hell. Directed by Marcus and Nick Hunt, The Dark Heart of Jason Voorhees: The Making of the Final Friday will feature never before revealed insights and footage. 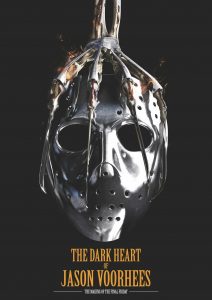 “Through interviews and behind the scenes details, you will understand the unique landscape the series was in at the time, having just changed studios and already being on the road to the eventual Freddy vs. Jason film which wouldn’t see release for another 10 years. You will see the unusual hand Adam Marcus was dealt and the immense pressure and scrutiny which was placed on him during production. And you will see genre greats, both who were in the film and not, weigh in on Jason’s journey to hell. In Jason Goes to Hell, you learned secrets about Jason you never knew before! In The Dark Heart of Jason Voorhees, you will understand what was and what could have been about The Final Friday!”

We don’t have a trailer or release date for The Dark Heart of Jason Voorhees yet, but producers just launched a killer poster, one the references the film’s thrilling final shot. Give it a look-see (right), along with the original trailer for Jason Goes to Hell (below).

Synopsis:
After being blown away by a team of FBI agents, Jason Voorhees (Kane Hodder) needs to find a way to overcome certain death. When his bloodied remains are sent to the morgue, his heart, still intact, is able to hypnotise a coroner and take over his body. After brutally dispatching a couple of FBI agents, he heads back to his favourite stomping grounds: Crystal Lake. Jason commences another teen massacre while a bounty hunter (Steven Williams) discovers the only way to kill him.

Jason Goes to Hell: The Final Friday was released in 1993 and stars John D. LeMay, Kari Keegan, and Kane Hodder.