Check Out the First-Look Trailer for Folk Horror Flick Midsommar

It’s rare to see a horror film that’s brightly lit, but Ari Aster is here to prove that sunny days can be scary, too. The first trailer for his new film Midsommar looks like a nightmare wrapped in a sweet summer daydream. 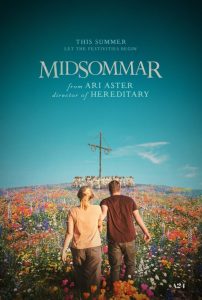 Set around a pagan festival that only takes place every ninety years, Midsommar stars Jack Reynor (Detroit) and Florence Pugh (Fighting with My Family) as a couple traveling to rural Sweden to visit the hometown of a friend. But the festivities planned by the local cult are not exactly conducive to an idyllic getaway. Black Mirror: Bandersnatch’s Will Poulter will also star in the flick, which is being released by indie distributer A24.

Aster terrified audience’s with his feature film debut, 2018’s horror darling Hereditary. From this first-look trailer, it seems like he’s knocked it out of the park again. With shades of The Wicker Man and all the runes and maypoles you could wish for, Midsommar looks set to be the folk horror event of the summer.

Midsommar will arrive in theaters on August 9th, 2019. Take a look at the trailer below and prepare for the festivities to begin.