CHARLOTTE VEGA TO STAR IN NEXT WRONG TURN INSTALMENT

The Wrong Turn franchise took, well, a wrong turn three or four movies back, but you never know what a new instalment will bring. And we’ll soon find out—another film is already being developed by Contantin film, which also brought us the Resident Evil franchise, and Charlotte Vega (The Lodger) is set to star. 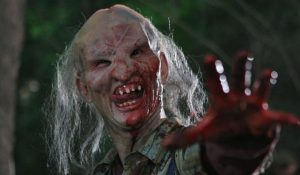 This instalment will be a new take on the franchise, which centres around a family of inbred cannibals living out in the woods of West Virginia and slaughtering anyone who happens to wander off the roads. The new film will follow a group of friends hiking the Appalachian Trail who have a run in the “The Foundation,” a community of mountain dwellers who aren’t especially friendly.

The film is in pre-production. We’ll bring you updates as they come down from the mountain.