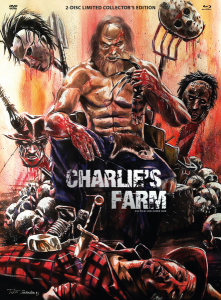 Plus, the cover art is fantastic; a blood-covered Charlie sits among the mutilated bodies of the killers that came before him, including fellow Aussie killer Mick Taylor from Wolf Creek. The film itself is pretty good, too. It may follow some familiar territory, but Nathan Jones makes an epic killer and it features Kane Hodder, what more do you want?

The mediabook will be released in Germany on July 30th 2015.