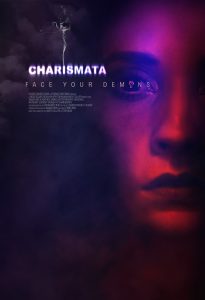 Synopsis:
British detectives Eli Smith (Andonis Anthony) and Rebecca Faraway (Sarah Beck Mather) are assigned to investigate a series of Satanic murders in London but their task takes a turn for the terrifying when Faraway starts suffering bizarre hallucinations, possibly linked to the killings.

During the first act of Charismata, writer/ directors Andy Collier and Tor Mian’s debut feature starts to resemble a jarring mixture of Se7en and defunct TV police drama The Bill (mostly due to the cops’ portrayal). This may seem peculiar for viewers familiar with Fincher’s masterpiece and the Brit bobby series but Charismata evolves into a stouter, surreal and more unique feature as it unravels. Subplots entwine, a single protagonist arises and the plot becomes adorned by perpetual black comedy which aptly gilds the cop/horror facets. Charismata also efficiently subverts horror and police procedural thriller genres but is slightly debilitated by an underdeveloped key character, a (for some part) reserved visual style and uneven tone along with budget limitations despite remaining hugely entertaining throughout.

After delving into the crime scene/ killing of a security guard, mismatched detectives, Smith and Faraway, brilliantly played by Sarah Beck Mather and Andonis Anthony, are initially established as joint protagonists. The couple recall the chalk and cheese cop partner stereotypes once considered common place in 80s/90s action comedies but have mostly been absent from our screens for some time and rarely presented in this context. Faraway is the headstrong, thirty-something, career focused female with complexes and a life fraught with nagging complications while Smith is the droll, older, cockney wash-out/geezer, quasi-scumbag copper. Smith fits in perfectly with the division’s pack of lolloping plods that oaf about the backdrop sprouting Neanderthal blusters like louts down the pub after drinking it dry (Burnside wouldn’t stand for it).

Character dynamics between Smith and Faraway are swiftly established via strong performances, chemistry and downplayed but decent dialogue, while retaining the staples that made the aforementioned stereotypes work so well in the 80s and 90s. As the plot unravels, the script gets scrappy, especially towards the end of the second act, but it’s frequently bolstered by edgy humour refreshing for this type of film which, in theory, should take itself seriously (there’s not many Satanist serial killer comedies out there). Most of the wit derives from Smith’s dead eyed reactions to the gravity of their investigation, often responding to ritual killing references with gruff cockney nonchalance. “Psychological profile?” “He’s a nutter,” etc. Smith’s stone faced, unresponsive reaction to one gratingly smug suspect is hilarious and reinforces the horror aspects (as good comedy should). 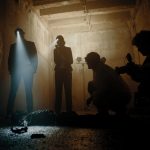 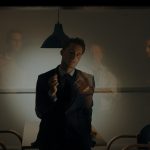 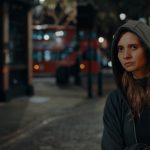 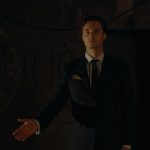 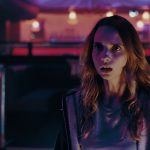 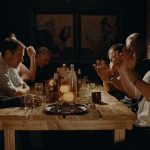 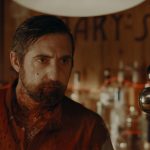 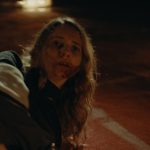 Charismata’s budget limitations are evident from the outset. Cut-price/seemingly Spectrum visual effects and a couple of shoddy supporting performances hinder the production despite the directors’ ability to compel and impress a distinctive visual style during dream/surreal/horror sequences. Along with an excellent death scene caught in a two way mirror. At times their style seems suppressed during the film’s more generic moments (actions flatly captured in badly lit scenes) and oddly subdued in moments when it should be flourishing. The lack of consistent visual prowess often curses Charismata with a made-for-TV air but Collier and Mian conjure fitting moods in dark, clammy crime scenes and during horror sequences despite these being dotted by jittery visual effects. Oddly when the directors’ style blossoms at its best, the story seems to sag (but never wilts). Both components have their moments, despite not being synchronised. The wide variety of characters keep Charismata colourful but the script never scratches/delves beneath the surface of Eli or ripens him/his relationship with Faraway, into someone/thing the viewer can empathise with. Even though Charismata is ultimately Faraway’s tale and her backstory is suitably humanised with house selling, ex-boyfriend and medical problems, Smith doesn’t evolve or do much considering the amount of time he spends on screen, and remains something of an enigma for most of the duration.

Charismata frequently beams with mordant humour which compliments the dank ambiance and trepidation. It’s also, at times, immensely (and detrimentally) humble but inventive in some key areas. Charismata shies away from budding into something substantial. Some of the supporting performances seem like last minute drafted in favours from friends and latter half twists and frights could have been deployed to engross but Collier and Mian’s ability to subvert stereotypes and tropes while mining strong humour and shaping characters makes their feature debut hugely entertaining. A brave ending, fantastic dream sequences featuring red walls, sex and strange, shadowy figures with nice (infrequent) visual distortions, suggests the creative pair could go on to craft more dynamic work but in the meantime Charismata is a more than passable calling card.