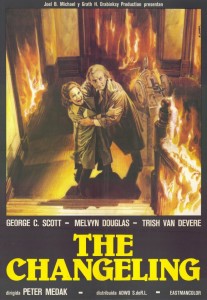 Synopsis:
When his wife and daughter are killed in a tragic car accident, composer John Russell moves into a massive and secluded Victorian mansion in order to try and piece his life back together and concentrate on his music. He soon realises he is not alone in the house, and that the ghost of a young boy who suffered a terrible injustice needs his help in bringing to light what really happened to him…

It’s not hard to see why haunted house films have been popular for so many years; they prey on a very base fear – that the place you should feel most secure, a sanctum from the sometimes crazy outside world, is no safe heaven, but contains a malevolent presence that wishes you harm. Or needs your help, as is the case in the often under-appreciated 1980 Canadian horror film The Changeling directed by Peter Medak.

John Russell (George C. Scott), up sticks and moves across the country, where Claire Norman (Trish Van Devere), helps him procure the rental of an impressive old Victorian mansion in which he can start to rebuild his life after the death of his wife and daughter. It soon becomes apparent that he is not alone in the vast, imposing house. Doors behave erratically, windows shatter, and a presence leads John to a bordered up attic room, in which he discovers, among the decades of accumulated dust and cobwebs, a small wheelchair, such as a child would use. Convinced the ghostly presence and this room are linked, John enlists Claire’s help in finding out the truth; that a young boy called Joseph died in that room, in the most horrific circumstances. Now Joseph’s ghost wants recognition and revenge, and needs John’s help in achieving these aims.

The Changeling is a taut, slow burner of a film. It has a sense of creeping dread that just keeps growing as John continues his investigation into what really happened in his house. As with all decent haunted house films, the house itself feels like a character in its own right; imposing, echoing and full of a scene of melancholy. George C Scott is flawless in the role of world weary widower John Russell. His performance is subtle and effective. Not a bombastic performance, but he conveys the air of quiet grief and despair that surely attracts Joseph’s spirit to him with conviction and the sense of a rational, but broken, man asked to believe extraordinary things. Trish Van Devere (Scott’s wife in real life fact fans) gives a good, grounded performance and is a nice counter foil to him (although she is part of perhaps the silliest part of the film, in which she is chased by Joseph’s wheelchair, which put me in mind of a Nightmare on Elm Street 3). Rounding out the impressive cast is Melvyn Douglas as Senator Carmichael, who gives a softly sinister performance as a very rich and powerful man who lies at the centre of Russell’s investigation.

Some scenes from horror films have been homaged and referenced so many times that it is easy to forget where they originated from. So, for all those not aware, whenever you watch a horror film and there is a scene in which a ball (red, for preference) bounces slowly down the stairs only to land at the feet of a shocked onlooker, that now cliché trope was first used to great effect in  The Changeling. Along the same lines, it also features one of the best séance scenes in horror, and one that has been aped many times, especially in the Insidious franchise via the character of the psychic Elise.  The whole séance scene and the aftermath is which John listens back to the tapes recorded during it are chilling viewing and the very definition of a ‘hair standing up on the back of the neck’ moment. The film is full of these; lots of small creepy moments, which gradually escalate to a twisted crescendo at the end. In fact the ending is the only thing that lets the film down slightly, due to lack of clarity about what happens to certain characters, and a sudden apparent case of astral projection that seems to come out of nowhere (if that sounds a bit random, that’s because it is). After such a tantalising and careful build up, it rushes a bit at the end sadly. The film uses the fact that the main character is a famous composer to fantastic effect with the score, with an evocative use of music that sounds classical, melancholy and wholly unnerving in equal measure. Peter Medak’s direction is focused and he has a strong grasp on the skills needed to build tension and wind the audience up like a watch spring. 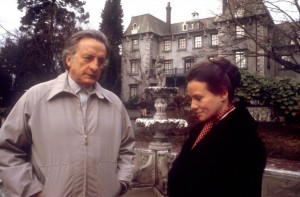 With haunted house films seemingly back in vogue currently (although often with the ‘twist’ that an individual is haunted and not the house), with films such as the Insidious films, The Conjuring and Sinister proving to be very popular there has never been a better time to delve into the impressive back catalogue of films that inspired these newer ones. While the 1960’s classics The Haunting and The Innocents are (deservedly) well revered, The Changeling, as a haunted house classic, is often overlooked. Which is a shame, as it really has the near perfect balance of horror and suspense (with added murder mystery bonus) and really deserves a top spot in the sub-genre.