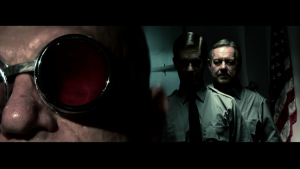 Alterna Comics is a creative powerhouse in the world of independent comics, especially when operating in the horror genre.  Titles such as Satanic Hell, The Black Hand and Mother Russia are among some of the best indie horror comics released in recent years, but the best horror title to ever emerge from the imprint is Peter Simeti’s The Chair, a psychological thriller about a death row inmate named Richard Sullivan who is forced to witness and endure the cruelty of the sadistic Warden and his prison officers.  Needless to say, it’s disturbing stuff, but as it gradually unravels it takes you to some surprising places.  And now we have a film adaptation, courtesy of director Chad Ferrin (Easter Bunny Kill Kill), starring the late, great Roddy Piper.

Based on a screenplay by Peter Simeti and Erin Kohut, The Chair is a worthy adaptation of its comic book source material; a dreary, claustrophobic and harrowing experience where prisoners are as lowly as rats on the totem pole and experimented on even worse.  Like the comic, the story centres around Richard Sullivan (Timothy Muskatell), a felon rotting away in a prison cell waiting for an execution that doesn’t seem to be coming any time soon. But when the plight of his convicts becomes too much for him to bear, he decides to fight back in a bid to keep his humanity, only for horrifying secrets and repressed memories to come to light.

It doesn’t take the most deviant and creative imagination to get an idea of some of the tortures the inmates are subjected to in The Chair.  It works just as well as a gritty prison drama as it does a mind bending horror film, and all of the stereotypes pertaining to prison life are present.  But The Chair is more than a torture film, and while it doesn’t shy away from showcasing cruelty through an unfiltered lens, there is method to its bleak exercise in human suffering.

Playing the role of the sadistic warden is genre stalwart Bill Oberst Jr. and joining the proceedings are Gremlins’ Zack Galligan as Riley, and of course, Roddy Piper as Murphy.  As to be expected with a cast this talented, the performances are more than decent, but it’s Oberst who steals the show, as he does in most movies he’s featured in. 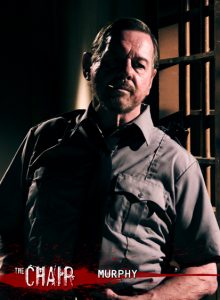 Some of the films financial constraints, however, are visible.  As is the case with low budget movies of this ilk, it’s a little rough around the edges.  But given the subject matter I actually found its rougher qualities to be rather effective, as they helped enhance the desolate atmosphere and nightmarish nature of the film.  Furthermore, I love movies where ambition surpasses budgetary limitations, and The Chair does a lot with very little, like all of Ferrin’s movies up until now.

Overall, The Chair is a movie that should be entered with caution.  It’s an unpleasant experience, but if you’re a fan of horror with a primal savage core, then I highly recommend it.