Chainsaw at the Ready; New Poster for Leatherface

A new poster has been released for the upcoming prequel to The Texas Chainsaw Massacre. Titled Leatherface, the film will delve into the back-story of one of the most iconic slashers, detailing what lead him to pick up the chainsaw for the first time.

The poster is simple and chilling, showing the infamous chainsaw eyeing up its next victim. The film’s marketing has done well to not showcase much of Leatherface himself, ensuring that the killer’s identity remains a secret and a surprise for when you see the full film. 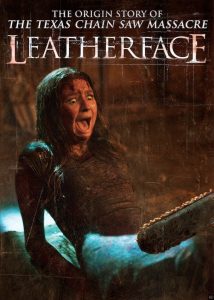 Synopsis:
In Texas, years before the events of the Texas Chainsaw Massacre, in the early days of the infamous Sawyer family, the youngest child is sentenced to a mental hospital after a suspicious incident leaves the sheriffs’ daughter dead. Ten years later, he kidnaps a young nurse and escapes with 3 other inmates. Pursued by authorities including the deranged sheriff out to avenge his daughter’s death, the young Sawyer teen goes on a violent road trip from hell, moulding him into the monster known now as Leatherface.

Look out for our review soon and be sure to catch the film when it debuts in the USA on DirecTV, before Lionsgate release Leatherface on 20th October 2017.