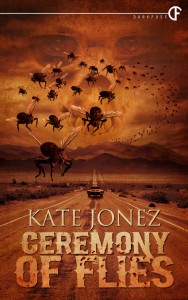 Ceremony of Flies by Kate Jonez was nominated for the Shirley Jackson Award 2014 and kicks off with an intrigued meeting and argument. The story is told in an almost quirky first person point of view through the eyes of waitress Kitty, after an argument with her boss, she quits and thrusts her head piece at him, believing she has killed him she’s then forced to go on the run with a customer she met only minutes before.

The customer is Rex and they embark on a blighted road trip, kill a few people, reveal a few secrets about each other and pick up a kid and a dog along the way. The only thing holding the story together at this point was Kitty’s personality and the fact that her sanity seemed to be slipping which sort of explained one or two strange things going on. They eventually end up at a Mission where the Sister Azrael takes their names into a ledger and the story then descends into plain weird with an added trip to fruitcakeville, a fascination for describing flies and four bikers that resembled the four horsemen of the apocalypse.

I was a little baffled with what had gone on, yet really enjoyed the style of writing so I reread parts and searched the internet for references to Azrael, with a determination to find out WTF was going on. The passage below pretty much cleared everything up, I think if I’d known this before, I would have enjoyed it more but it was a little obscure, truth be told.

‘Depending on the outlook and precepts of various religions in which he is a figure, Azrael may be portrayed as residing in the Third Heaven. In one of his forms, he has four faces and four thousand wings, and his whole body consists of eyes and tongues, the number of which corresponds to the number of people inhabiting the Earth. He will be the last to die, recording and erasing constantly in a large book the names of men at birth and death, respectively. He will receive the souls in the graves.’

In conclusion, I would certainly read more of Kate’s work as I enjoyed the narration mixed with Kitty’s occasional harsh line of thought and black humour.