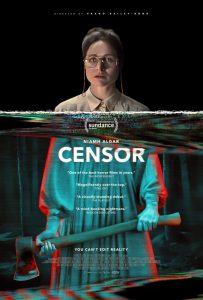 The official trailer is here for Censor, a new British horror film set in the Video Nasty era.

The directorial feature debut of Prano Bailey-Bond, Censor follows Enid, a film censor who takes pride in her meticulous work, guarding unsuspecting audiences from the deleterious effects of watching the gore-filled decapitations and eye gouging she pores over. Her sense of duty to protect is amplified by guilt over her inability to recall details of the long-ago disappearance of her sister, recently declared dead in absentia. But when Enid is assigned to review a disturbing film from the archive that echoes her hazy childhood memories, she begins to unravel how this eerie work might be tied to her past.

Niamh Algar (Raised by Wolves) stars as Enid in the film, which was co-written by Bailey-Bond and Anthony Fletcher. The cast also includes Michael Smiley (A Field in England, Come to Daddy).

Censor hits theatres in the US on June 11th before arriving On Demand on June 18th. UK horror fans can catch it in cinemas from June 25th. In the meantime, check the kids are out of the room—then check out the trailer below!