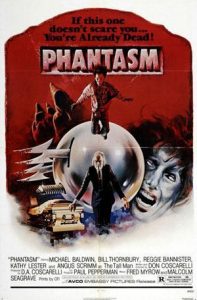 Don Coscarelli’s 1979 indie horror gem Phantasm turns 40 this year, and if you haven’t enjoyed a tall glass of the Tall Man recently, there’s never been a better time to revisit the series. Well Go USA Entertainment is releasing a new Limited Collector’s Edition Blu-ray set of the films, complete with a pristine 4K restoration of 1988’s Phantasm II, brand new special features, and a full-size replica of one of the Tall Man’s killer spheres.

Called the “Phantasm Sphere Collection,” this box set will include all five Phantasm movies alongside many previously released special features. New extras include a new feature-length documentary about the making of Phantasm: Ravager, one of the final films the great Angus Scrimm starred in before his death in 2016.

The new Phantasm blu-ray collection will be released during the Halloween season.