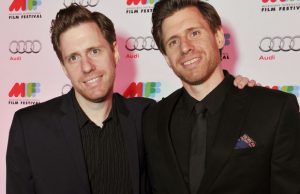 CBS Films has acquired the US distribution rights to Michael and Peter Spierig’s horror Winchester. The film is based on the true story of the Winchester Mystery House which is said to be haunted by the ghosts of those killed with Winchester rifles.

The house was built by the widow of gun magnate William Winchester, Sarah Winchester, in 1884 who was told by a medium to leave her original home and build a house for the spirits of the deceased. Some sources claim she moved for a change of scenery, but some suggest that she believed the medium and attempted to appease the spirits with the construction of this huge house.

Synopsis:
Winchester tells the strange and dramatic tale of Sarah Winchester, who was heir to the Winchester firearms fortune. Her husband and child died suddenly, and Sarah came to believe she had been cursed by the lethal legacy of the “gun that won the west” and all of those who ended up on the wrong end of the gun barrel. She consulted a medium, who sent her to San Jose in 1884 to begin a massive construction process that took 38 years and resulted in a 24,000-square-foot, 160-room Gothic mansion.

Helen Mirren will star as Sarah Winchester and the film is set to begin filming in March 2017 in San Jose and Australia. The Spierig Brothers are currently working on the next addition to the Saw franchise, so that’s exciting.