CBS has acquired the US rights to the thriller Strange But True; an appropriately weird story that follows a pregnant woman who claims that the father of her unborn child is a man who died 5 years ago.

Synopsis:
Ronnie Chase tragically dies on the night of the school prom while his girlfriend Melissa survives. Five years later, Melissa turns up at the Chase household to tell the surviving members of his family that she is pregnant with his child. Though sceptical, they find themselves trying to prove her right, compelled by the resurfacing of their grief, only to discover that the truth is much more terrifying than they could have ever imagined. 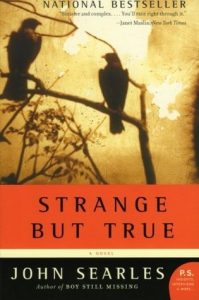 The film is based on the 1995 novel written by John Searles and Rowan Athale will be directing the adaptation. The script has been written by Eric Garcia.

I haven’t read the novel, but the concept sounds mighty intriguing so I might have to pick it up. Has Melissa been impregnated by a ghost or has Ronnie perhaps been alive the whole time? We’re unsure what the other possibilities could be, but I’m certain that whatever is going on is bound to unravel some dark family secrets.