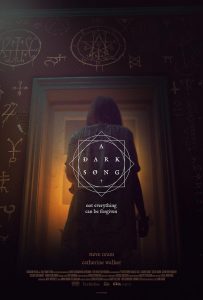 Last week we spoke with Steve Oram all about Liam Gavin’s captivating directorial debut A Dark Song. Penned by Gavin, the film relates the tale of Sophie (Catherine Walker), a determined young woman who reaches out for the help of a damaged occultist (Steve Oram) but the two soon find their lives (and souls) put at serious risk when they perform a dangerous ritual to summon dark forces which they believe will grant them what they want.

With A Dark Song heading to cinemas this Friday, April 7, SCREAM’s Howard Gorman caught up with Catherine Walker to talk about tapping into someone desperate enough to take whatever measures necessary to dissolve one of the worst kinds of grief imaginable…

SCREAM: How did you the script reach your hands and what was it about the premise, and especially your character Sophia’s plight, that leapt out at you?

Catherine Walker: When I first got involved it was one of our producers, David Collins, who passed on the script to me and I fell in love with it immediately. It really surprised me in terms of where it went to. You read so many scripts and you can kind of predict where they’re going but there were so many much deeper elements to this script that I found fascinating. And I found the character of Sophia fascinating: That journey to how you dissolve grief and how you deal with unimaginable events that happen in your life.

SCREAM: The backbone of the story is this grief that you’re going through and the sheer lengths that you are willing to go to deal with that. It must have been a challenge to play someone who goes to such lengths but at the same time still has her senses about her, or at least it seems.

As it is such an unimaginable thing that happens to Sophia it was about staying in that place of grief and what happens when grief gets so solidified. She’d been living with this for quite a long time so at this point in time, it’s so deeply within her that it’s shut her down in many ways which is why she can make the decisions that she makes. She disconnects from herself and everything that she does is to try and deal with this grief so I think that when we first meet her I don’t think she’s particularly rational. It just that there is A LOT of darkness there that she can’t find a way through so she will do whatever it takes to avenge what has happened and to avenge the grief and to make sense of a certain horrific act that has taken place. So, playing the character, I held on to that place and that darkness.

Sophia is stepping into the unknown so, in a way, it would have been wrong for me to have too much knowledge of it. She bites off more than she can chew and part of the process of the film is going from the theory of this to actually what happens when you play with and summon those dark forces. Sophia is also quite fearless so it was important that I wasn’t holding on to knowing too much about the terror of all that. She was finding it all in the moment.

SCREAM: A lot of the intrigue comes from the fact that the two leads have a lot of skeletons in their closets which reveal themselves as the film progresses. Did you get much chance to discuss all those skeletons and your backgrounds with Steve before the shoot?

What was nice was that we had a little bit of prep time together. I was also able to use that time to find the back-story of what had happened to Sophia so that I was able to have that as an image in my mind as opposed to it just being something we’d talked about. It had to be very much alive in her. And Liam is such a phenomenal director and what was really great was that when we were playing, we were very much able to be in the moment because it stands a period of time so we were able to play from exactly the moment we were in as opposed to having to think about where we were in the process. At the beginning of whatever scene we were at, Liam was always able to explain exactly where we all were and that the tension was at level 8 or 4 or whatever. And it was very much a trinity. It was very much the three of us working together all the way through.

SCREAM: How much did you prepare when it came to some of the more torturous scenes with Steve that must have been a nightmare to shoot? A scene involving a bathtub still haunts me now. 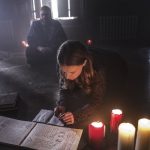 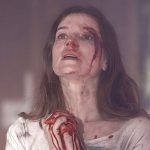 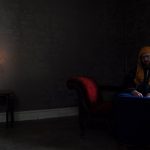 Well I think we probably went a little bit too far with that bathtub scene in the sense that I was living it so much in the moment. When you’re put underwater backwards and you’re performing and filled with the feelings of the character, the body reacts so that was a really tough shoot. No matter what you’re thinking in your head, your body is saying, “No. I shouldn’t be under the water.” A lot of what you see you get for free there (laughs) because my body was reacting to that. It certainly was a very physical shoot but I think that was important too.

SCREAM: Aside from A Dark Song I know you’re in the series Versailles. What future projects can you shed a bit of light on for us?

I’m about to start shooting the third series of Versailles in May. I entered in the second series playing Scarron who becomes the second queen of Louis XIV. She’s quite a fascinating character because she’s not of nobility and comes from nowhere really and ends up being the most powerful woman in France.

Aside from that, I just wrapped on a film called Cellar Door which has some thriller and horror aspects as well. I also did another film called The Delinquent Season by writer/director Mark O’Rowe so, yeah, it’s a busy time for me.