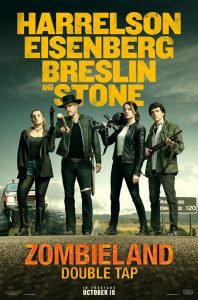 It’s been almost 10 years exactly since Zombieland was released, and a new featurette for the sequel brings the whole gang back together.

Jesse Eisenberg, Woody Harrelson, Emma Stone, and Abigail Breslin are all back for Zombieland: Double Tap, along with the director Ruben Fleischer and writer Rhett Reese. They’re joined by a host of new faces, including Rosario Dawson, Luke Wilson, and Zoey Deutch.

In the sequel, which hits theatres on October 18th, Columbus, Tallahassee, Wichita, and Little Rock face off against evolved breeds of zombies, not to mention their fellow survivors. Nut up or shut up and watch the new featurette below.