Cast Confirmed for Latest Day of The Dead Rehash

Actor Johnathon Schaech last week shared this photo on Twitter, which shows him in a makeup test for the latest remake of George A. Romero’s Day of The Dead. In the background is glimpsed the film’s cast, which has now been confirmed. 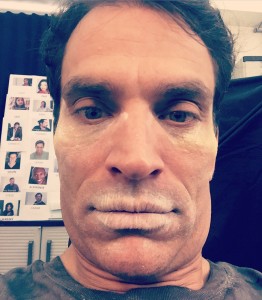 A new vision of Romero’s classic, the film “…follows a former medical student tormented by a dark figure from her past, who happens to be a half-human, half-zombie hell-bent on destroying her.”

The Corpse of Anna Fritz director Hèctor Hernández Vicens will direct from a script by Lars Jacobson and Mark Tonderai (The House at the End Of The Street), who had been attached to direct when the project was conceived in 2013.

This one’s going to have to work hard to get horror fans on its side, due not only to the fact that Romero’s original is pretty much flawless, but that Steve Miner’s 2008 take on the story was such a wretched mess that we’d all like to forget.