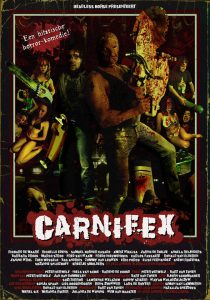 When a group of friends start to get gruesomely killed one-by-one, it’s up to Bram to figure out the killer’s identity before death comes knocking on his door, too.

If you like extreme violence, gore and general craziness then you should find a lot to enjoy in this 55-minute Dutch slasher thriller. In its desire to be one of the most tasteless Dutch films ever made, Carnifex effortlessly succeeds. With characters that match the level of grossness depicted in its gory violence, Carnifex manages to seep with utter abhorrence. With nauseatingly graphic depictions of murder and death, Carnifex is a short and sweet piece of exploitation that is unabashedly concerned with grossing its audience out and very little else.

It would be wrong to criticise Carnifex’s lack of storyline, however much that is true, because the desire here is to shock, appal and offend, not to educate or encourage thought. As a mindless piece of gory entertainment, Carnifex makes it clear that it couldn’t care less about presenting something enjoyable and that is to be commended. The film’s flaws cannot be excused, but it is impossible not to appreciate writer-director Bart van Tunen’s effortless homage to the gory glory days of ’80s slashers and exploitation. There’s death by chainsaw, machete and giant toothbrush; so there’s no shortage of gruesome, creative killing for those that like their nods to go hand-in-hand with unparalleled playful murder weapons. The blood splatters merrily and the kills come quick and fast, so Carnifex benefits from its short runtime that never leaves you wishing it would end.

This does shine a light on how Carnifex would suffer if it were to be a longer feature, but it’s a well-chosen decision to not allow it to outstay its welcome. Rather than bask in its bloodshed for 90 or so minutes, there is a necessary understanding that this non-stop murder spree could only last so long. Bram becomes a reminder that, like this film, all good things must come to an end and his drug and alcohol-fused life must pave the way for something significant. He becomes the embodiment of a man forced into action and a character that must battle his demons alone because, as Carnifex so playfully suggests, the police aren’t going to be much help.

As an exercise in reminiscing about the days when horror was not quite so serious, a playfulness is weaved in among Carnifex’s bloody gore. The police are unhelpful, because Bram tells them the killer looks like a mushroom, arguing that a dead killer has risen from his grave and a later scene sees him entangled in a bizarre plot to buy burritos. Carnifex’s blend of eccentricity, comedy and full-blown horror is an appealing mix, but the film could be improved upon if there was a little more going on beneath the surface. It’s fun to journey with Bram on his mission to take down a killer, but the only enjoyment lies on the surface of a film that is otherwise hollow. 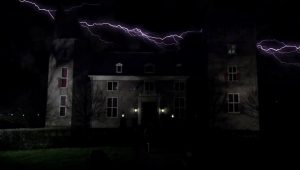 As it is only 55-minutes long, it is difficult to complain about Carnifex’s ridiculous and gory slasher thrills, but aside from an impressive use of blood, guts and gore, there is little else to enjoy. As a mindless piece of exploitation Carnifex is a great amount of fun, but this is an otherwise forgettable and fruitless feature.