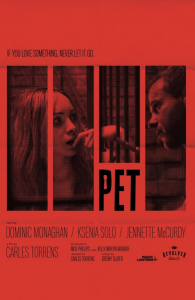 We feel like we’ve been talking about Carles Torren’s horror-thriller Pet for quite some time, but the film has only just been acquired for distribution. Orion Pictures and Samuel Goldwyn Films have acquired the rights, planning to release Pet on VOD on 2nd December, before it hits DVD on 27th December. If you feel like you haven’t been treated well enough this Christmas, then a purchase of Pet might just cheer you up.

Synopsis:
Seth bumps into his old high school crush and quickly becomes obsessed with her. He takes her captive underneath the animal shelter where he works but soon suspects that his old flame is not who she seems to be.

You can take a look at a clip from Pet below, which shows the calm before the storm. Apparently she’s not exactly what she seems, so Seth better watch out.