Synopsis:
The year is 2021 and 12 strangers have been chosen for a game that will see only one of them survive over twenty-four hours. The killer game which sees each of them infected with a virus that will only do one thing without the cure……kill. 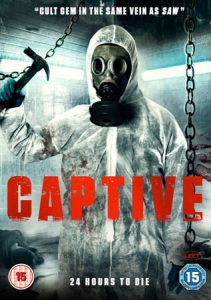 Films with one single setting can go two ways; it can add to the experience or it can hinder it. Sadly Director Stephen Patrick Kenny’s Captive is the latter. Failing to hit the mark where films like Cube, Buried and 128 hours thrive, Captive clumsily moves along for 84 minutes and the end result is a disappointing mess that is painfully exhausting to watch.

The plot is relatively simple as twelve strangers from all walks of life wake up in a barren storage unit and instantly begin to conspire. Not too long after the group are soon informed by a mysterious voice that they have been infected with a virus and their only way out is to play a game with only one outcome; only one can survive. Sounds familiar? It should but don’t get too excited as Captive is instantly forgettable.

Presented in chapters the film chronicles actions and reactions as the group of survivors begin to dwindle. But as the virus takes hold some of the characters turn into demons and attack the others leaving no option for those still alive to protect themselves from harm. Shot entirely on what appears to be an old digital camcorder, the film carries with it am amateur feel where it looks like the special effects have been created via Snapchat facial recognition filters. Heck, even the script, also penned by Kenny, is dull and feels uninspired with no injection of pride or passion whatsoever. 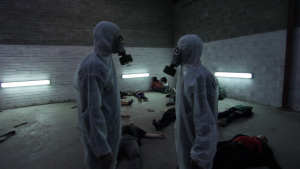 All in all the film lacks any real clout and this is made worse by the fact that its characters are nothing more than walking stereotypes. Speaking of which, not one single performance in this film was good. Every performance was over the top, the dialogue is cringeworthy and the end result was almost laughable. As you can tell I really didn’t enjoy this film at all and I strongly urge you all to avoid it where possible. You have been warned.