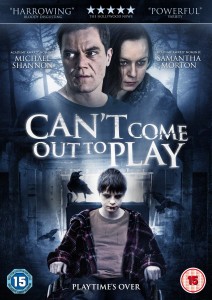 Synopsis:
John McNaughton directs this horror thriller starring Samantha Morton and Michael Shannon. After the death of her parents Maryann (Natasha Calis) moves in with her grandparents. In her new neighbourhood, she befriends Andy (Charlie Tahan), the boy next door, whose parents keep him confined to their house due to his serious illness. As the young pair grow ever closer, Charlie’s mother (Morton) becomes increasingly concerned for her sick boy and obsessive in her quest to shelter him from harm.

Less so a horror and more a thriller, Can’t Come Out To Play plays on fears of claustrophobia and being incarcerated. The horror resides in the thread of incapability which runs through the entire film. In one or another, each of the characters are trapped. Whether it be Richard, who can’t escape his unhappy marriage and controlling wife, or Andy who literally can’t escape from his wheelchair, there is a definite exploration of what it means to be stuck in a situation. The film’s underlying is a positive one; despite the unhappiness felt by many in the film they all act unselfishly, or at least that’s probably what they’re telling themselves. Kathleen chases away her son’s only friend for his own good, right? Maybe. There are a lot of complex themes here and they are touched upon carefully, the direction is intelligent and clear; we never truly believe that Kathleen is entirely evil and you should be able to offer her up some sympathy. She makes a lot of stupid, irrational decisions, but we are reminded that she is only human and prone to mistakes.

Can’t Come Out To Play explores ideas surrounding the role of the woman; with the two main female characters representing completely opposing ideologies. As the mother, Kathleen’s only desire and drive comes from treating her ill son, and without that, she will lose her identity. If a woman can’t be a loving mother, then what can she be? She represents the traditional idea of woman’s role; the one that states women are to be good housewives and must dote on their husband and children. The most terrifying aspect of the film comes from this harrowing performance by Samantha Morton, who plays the doting, loving and obsessive mother. Her piercing eyes stared straight in to my soul and turned my blood to ice. With just a simple nod or sideways glance she is able to elicit a ridiculous amount of fear and unease. Her performance is understated and subtle, yet perfectly and entirely successfully at presenting the quiet evil that resides inside her character. The know-it-all attitude that dominates her personality, yet there is a childish innocence and insecurity deep down within her. You have to see very far past the craziness, but I am positive it is there. Played by Natasha Calis, the young Maryann who befriends Andy represents the modern female; she is strong-willed, brave and fearless. She doesn’t think twice about breaking the rules which state she can’t see Andy and fights Kathleen’s home-based reign of terror with sheer determination. Natasha Calis plays her wonderfully with an amount of emotion you can really feel. For someone so young she is an utter badass, showing that young girls can be just as tough as their seniors.

As the father, Michael Shannon is a bit annoying. You’ll probably want to shake him, tell him to man-up and stand up to his wife. He does get a 1-up on her at one point and it’s a great little moment, you’ll cheer him on and then realise you’re genuinely terrified for his safety. I would be out of there in a second. We never know how Kathleen’s going to act and her personality shifts more suddenly than the British weather. Overall, the whole cast are spot-on and deliver great performances and they do drive the film forward. Tension is built up effortlessly and, at times, it is the screaming silence that speaks louder than any words could.

A part of the film’s enjoyment is lost in its slow pace. It manages to find its stride at the half-way point, but up until then it does drag ever so slightly. However this can be forgiven, because as the film draws to a close you may feel a bit thankful for the amount of time you have vested in this family. There is a surprising finale, which is all the more hard-hitting because you’ve been on a long journey with these characters. Also, there are twists and turns elegantly weaved in to the story to keep you on your toes, preventing Can’t Come Out To Play from being as predictable as you may think. It may seem like a bit of a chore at times, but there is a lot to enjoy in this quietly terrifying, character-driven horror thriller and it’s worth watching for Samantha Morton’s performance alone.