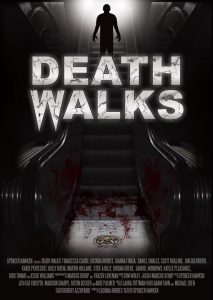 Premiering in the UK this weekend is Death Walks, which sees a group of people hiding inside a shopping centre from the zombie horde outside. With twists and turns aplenty however, this looks far from being a mere Dawn of the Dead clone, as you can see in this trailer.

Shot in Romford, Essex over three years, Death Walks is a true zero budget venture. As writer/director Spencer Hawken told Scream: “…everyone contributed in anything other than cash. Actors donated time, crew donated time in exchange for experience, the location donated itself for exposure, and Asda, Subway and McDonalds fed our team for free during the shoot.”

Rather excitingly, Death Walks sees the return of Cannibal Holocaust’s Francesca Ciardi to the screen after a 25 year absence. Ciardi played Faye in Ruggero Deodato’s game-changing horror classic. Joining her in battling the zombies 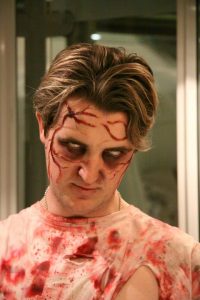 Hawken remains tight-lipped regarding the finer points of the film’s plot, and the trailer brings its own mysteries, with those spookily inanimate zombies. All will be revealed very soon however, at least for those attending the premiere in Romford on Friday, which is followed by a Q&A with Hawken and all of the lead cast.