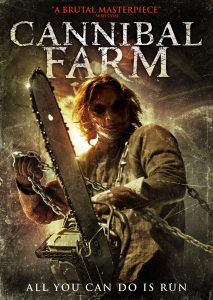 Not hard to see what they’re going for with this one, eh? Bringing its own chainsaw massacre to the screen in January is High Octane Pictures’ Cannibal Farm, which features a mask-wearing, chainsaw-wielding deformed son of a deranged farmer carving his way through any visitors to the homestead. The film even pays homage to the original Leatherface, with a villain named after the late Gunnar Hansen. The action here takes place not in the sun-baked wastes of the Lone Star state however, but in the good ol’ British countryside.

Synopsis:
The Harver family head out on an idyllic summer camping trip where they can bury past tensions and enjoy some family bonding. But when their camp is sabotaged by an unseen intruder in the night, they head to the nearby creepy old farm desperate for help, where vengeful farmer Hunt Hansen and his hideously deformed son aren’t farming animals…

Cannibal Farm hits VOD on January 2nd. In the meantime, check out the recently-released trailer.