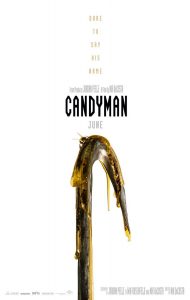 In the original film, the residents of Chicago’s notorious Cabrini-Green housing project were terrorised by the “urban legend” of Candyman, a hook-handed supernatural killer who is summoned when his name is spoken five times in front of a mirror. Set years later, the sequel sees artist Anthony McCoy (Yahya Abdul-Mateen II) and his girlfriend Brianna (Teyonah Parris) moving into the now-gentrified neighbourhood, where Anthony stumbles upon the legend. Looking for inspiration, he delves deeper into the bloody details—unwittingly opening the door for a fresh wave of violence.

The film was co-written and produced by Jordan Peele (Get Out, Us) and Win Rosenfield. Tony Todd, the original Candyman, will make an appearance, though it’s not yet known how large his role will be.

Candyman will slash into theatres on June 12th, 2020. Be his victim by watching the new trailer below.