Campbell Grobman Taking Another Stab at Day of the Dead

Time to put on your best cynical faces, ‘cause George A. Romero’s grim 1985 classic Day of the Dead is being remade. Again.

Attempting to wash away the sour taste left by Steve Miner’s universally despised 2008 take on Romero’s bleakest ‘Dead’ film, Nu Image/Millennium are looking to approach the material from a slightly different angle. The new vision is described as a post-apocalyptic tale that “Follows a former medical student tormented by a dark figure from her past, who happens to be a half-human, half-zombie hell-bent on destroying her.” 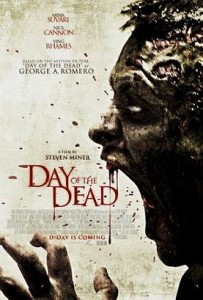 The Corpse of Anna Fritz director Hèctor Hernández Vicens will direct, having taken the reins from Mark Tonderai (The House at the End Of The Street), who was attached to the project in 2013. Back then, this synopsis was released: “Years after the zombie plague has wiped out most of Earth’s population, a group of scientists and survivors attempt to find a cure, and instead open Pandora’s box.”