It was way back in 2014 that George A. Romero’s son Cameron announced that he was working on a prequel to his father’s landmark horror classic Night of the Living Dead, launching an Indiegogo campaign for what was then tentatively titled Origins. The project is now back on our radars with the new title Rise of the Living Dead, and Cameron Romero has announced the first cast member. 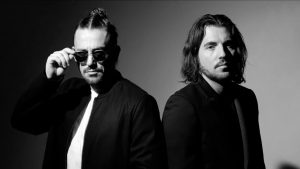 Though nothing has been revealed about the character he will play, Dimitri – one half of Belgian DJ/record producer siblings Dimitri Vegas & Like Mike (pictured) – has become the first name attached to star in the film.

Here is the plot outline released for the Origins campaign:
“Origins takes place in the Turmoil of the 1960’s just shortly before “Night of the Living Dead”, and explains how The ‘Original’ Romero Zombie was created. In 1962, Dr. Ryan Cartwright was on the scientific and altruistic path to find a way for humans to sustain life in the event of M.A.D (Mutual Assured Destruction), a huge topic brought on by the Cuban Missile Crisis. Little did he know that over the course of the next several years of his life, he would take a well-funded and military focused journey to the darkest corners of the world… as he creates the ultimate weapon for the government and a curse that will plague mankind for the rest of days.”

Upon revealing the film’s new title on Facebook last month, Romero wrote:
“Many of you know that I have been working to tell a story for many years…Many have approached me about making this film and I’ve said no to many because even though I’m not a “precious” artist, this one is special… this one is mine… this one… is my love letter to my dad… to his work… to the fact that he was once called the most dangerous filmmaker alive… to the fact that society in 1968 wanted to shut him up as much as they wanted to celebrate him…

This one is the prelude to “Night,” the film that created the pop culture phenomenon that has inspired thousands of filmmakers from backyard auteurs to $180M features to the single longest running and most successful show in the history of television…

This one has been a long time coming…”

Romero then added:
“And it is my absolute promise to you all that this film will be everything it needs to be.”
There’ll no doubt be a lot of talk about this one in 2018, and a huuuge weight of expectation.