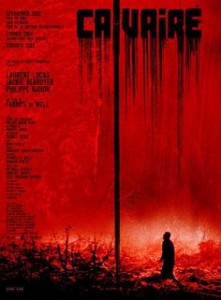 Synopsis:
After breaking down in the woods, a young wedding singer named Marc is befriended by a bizarre innkeeper named Bartel.

It’s very rare when a horror film exists in a class all by itself. In this day and age, atmosphere is harder to come by in modern horror film.  Calvaire is a masterpiece of atmospheric horror. Director Fabrice Du Welz takes us on a bizarre journey, filled with xenophobia, forced feminization, religious symbolism, bestiality, and even a touch of black comedy.

We follow a wedding singer named Marc, who goes from entertaining small crowds, to becoming a vessel of an older widower’s deviant pleasures. After breaking down in the woods, he’s taken in by a hermit named Bartel, who runs a local inn. From this point forward, we’re drawn into a world that defies all logical explanation. One of the most natural human fears is xenophobia, more specifically a fear of the unknown. We tend to think of ourselves as civilized, and anything different from out way of life as barbaric and backwater. This film takes this fear, and taps into it. Just what happens on the wrong side of the tracks? 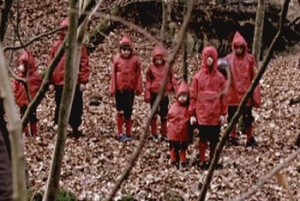 The ‘wrong side of the tracks’ in this film is the village near Bartel’s Inn. To say the inhabitants are on the strange side of things is a bit of an understatement. They seem to encompass every stereotype one might have of rural inhabitants. They exhibit strange behavior, engage in strange practices, and really give the story an edge that combines Deliverance with The Texas Chainsaw Massacre.

One thing you’ll notice about his film is its complete lack of a soundtrack. This allows you to be completely absorbed into the story. Many times, music in a film helps build up our emotional involvement with a film. Here, it’s the story and the imagery that do that work for you. This allows the events to manifest within your subconscious, and let them take effect on you. In some ways, this film brings you outside your comfort zone, without realizing you’re leaving it. 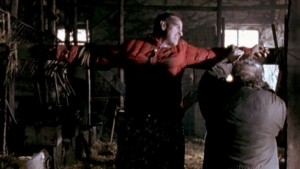 The bulk of the story is the relationship between Marc & Bartel. What starts off as two one pretending to help the other, quickly shifts into something dark. Here, we’re taken down a road of forced feminization, as Bartel is convinced that Marc is his deceased wife. This whole chain of events is unnerving, and absolutely terrifying. Instead of taking an angle of forced gender reassignment, this film takes a completely different approach. We watch as Marc helplessly is forced to assume his new identity, not in a physical way, but a mental one. In some ways, our identity is all we really have, being forced to leave it behind is a frightening thought. Watching Marc succumb to Bartels whims is just one of the many elements that lend this film its unique atmosphere.

Calvaire plays upon our inner fears, as touches our psyche in a way that few films can. The imagery is only a small portion of what’s caused this film to hold up for over a decade. More than anything else, this film is the personification of psychological terror.