Synopsis:
A group of college friends head to an isolated lakeside house for a weekend of sun, fun and sex. Unfortunately for them there is something nasty lurking in the local water supply, which they soon discover with some very unpleasant results. 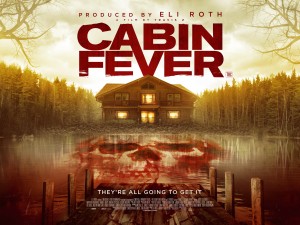 In 2002 the enfant terrible of modern horror Eli Roth made his name with the now notorious Cabin Fever, a film packed with such relentless, cringe inducing horror that people still discuss it in hushed tones almost fifteen years later. Despite its success and it setting Roth on the road to fame and fortune Cabin Fever, even its fans have to admit, was not a great example in the art of filmmaking: on many film barometer sites it only manages to raise its head above average scoring. So why, you have to ask yourself, have a team of filmmakers – with Roth himself acting as executive producer – seen fit to remake the film, and after such a short span of time?

Roth, and those who follow his lead, seem to be of the belief that to induce real horror in a viewer you have to show everything in full, close-up, gory glory. With these guys you can forget the old idea that less is more. And nowhere more so than in this new imagining of Cabin Fever. There is no attempt at subtlety here as those unfortunates infected by a killer virus quite literally disintegrate before your very eyes: one scene set in a bathtub where a girl shaves away more than her mere stubbly leg hair, is particularly unpleasant. Add to this people getting bitten, eaten by rabid dogs, shot and burnt to death and the result is an onslaught of nasty nauseousness that becomes increasingly hard to watch. Which is of course the reaction that makers behind this kind of film want. As Roth recently proved with The Green Inferno (2013) – his loose retelling of the 1980 classic Cannibal Holocaust – there now seem no boundaries as far as the lengths you can go are concerned, with each new film in the genre merely trying to outdo the last.

My two star rating for this film comes simply because some of the gory death scenes are mildly entertaining. In its favour the film is also stunning to look at. Filmed in Oregon, USA, the scenery which surrounds the lakeside house where the horrors unfold is beautiful, in only the way that rural America can be. Its isolation also adds to the sense of desperation and fear for the young people once the virus – or whatever it is that has contaminated the area – sets about its dirty work. Everything else though – from the sex mad kids themselves, whose only interest seems to be in how quickly they can get each other into bed, to the inept police and local, homicidal hillbillies – is simply a rehash of every teenager-in-peril, something in the woods horror film that’s gone before. 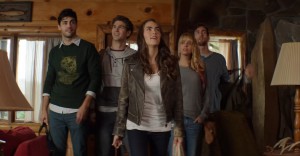 If, like me, you haven’t seen the original, this film might just manage to hold your attention until the end due to mere novelty value. However, if you know the earlier version and are a fan of Roth inspired grisly effects, then you wont miss much if this one passes you by, as you will most likely have seen it all before.