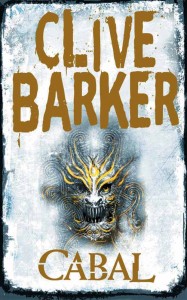 I listened to the audio of Cabal by Clive Barker which comes in at fifteen minutes shy of seven hours and follows the disturbed protagonist Aaron Boone. Boone is a troubled man and is manipulated by his psychiatrist into thinking he’s a serial killer. This modern day witch doctor, Decker, doesn’t want to kill him with drugs he wants Boone to be his scapegoat.

Through rumour and hearsay he finds himself heading for the fabled Midian, where monsters take refugee, hot on his heels is his jilted girlfriend and Decker, with his Button Face killer mask and persona close at hand. Boone thinks himself a monster, he seeks them and when he arrives in Median, he’s bitten by a true monster of the Nightbreed and this is where the story gets interesting.

Horrifically imaginative, you occasionally see echoes of Clive Barkers intense and vivid imagery in modern fiction, I could name several pieces I’ve read in the last couple of years influenced by ideas in Cabal. The concept of Midian is fascinating, as is the Nightbreed but unfortunately detail was scant, just enough to whet the appetite, there was an almost purposeful lack of history or exploration of the place and the monsters contained within. Which in my view could have been easily fitted in, half a page here, half a page there, perfection could have been that bit closer with more thought on the world building.

Deckers Button Face mask was something I wasn’t really a hundred percent certain with, a human monster with all the other things running round, was it needed? Could we have got away with just a normal knife welding psychopath, I think in the end it worked and usually I like the old killer mask philosophy. So yeah I enjoyed Cabal, some brilliant ideas, fluid writing and thoughtful prose, just needed more. Good stuff all told.