Butterfly Skin is a Russian serial killer tale that has been translated into English. Our protagonist is Ksenia (sometimes affectionately called Ksyusha), the female editor of Evening.ru, a news website. The website is in desperate competition for hits with the other leading news websites. She is not the typical girl next door; she enjoys BDSM relationships and craves brutality. A serial killer has begun striking around Moscow and Ksenia sees this story as a sensationalist opportunity to launch a new site dedicated to covering the killings and pulling in ratings, advertising, and fame. It is through this new website that she draws the attention of the killer. They begin an online relationship over instant message, although she doesn’t realise who she is talking to. (Internet safety, kids!) The results of this relationship prove deadly.

This novel is very Russian and it’s interesting to have an insight into the culture, getting glimpses of the day-to-day in Moscow, which I don’t generally hear too much about. There are times when the book makes references that are difficult to understand, such as talk of political parties and events that took place. Russian names also take some getting used to. Of course, it’s much better than changing the names for Western audiences, but still, it was a bit confusing at times. The cultural differences immediately set this book apart and make it, to a degree, a refreshing experience. The writing style also is a little different, switching between first and third person.

Some might debate over whether a book that follows a serial killer is a thriller or a horror. This is horror and has some truly horrific kills. You’re taken into the mind of a very sick individual and the level of sexual violence is truly grotesque. It’s certainly not for everyone. I carried out a little test where I opened the book to a random page five or six times, and every page I flipped to contained violent images, so I’d say the violence is 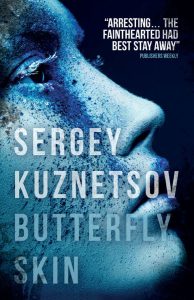 consistent. The problem is that almost all of the violence is the killer recounting what has already happened. The past tense means you’re never there with the victim, hoping for escape. It really kills the tension, and that just drains the energy from the story and the reader’s engagement. You don’t find your heart racing as you wonder what will happen.

There are many places where the story slows down to a crawl as we learn more about the major characters in Ksenia’s life. It was a chore to get through in places. Not much happens – just characters contemplating their lives and their pasts. Ksenia doesn’t even meet the killer until the last few pages, and despite a powerful twist near the end, the climax does not live up to expectations. I’m not sure if this is a case of lost in translation or cultural differences. This book certainly didn’t do it for me.