Bury Yourself in the UK Poster for Pet Sematary

An alternative UK poster has been revealed for Pet Sematary and it’s not quite as dark as the previous poster we’ve seen. This one hones in on a singular gravestone, instead of focusing on what’s buried below. There is something undoubtedly ominous about the spider web-ridden cross and the chains that cover it, but I prefer the original one. 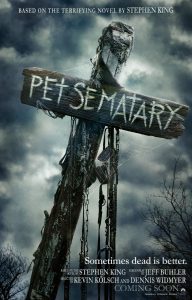