Synopsis:
A group of upper class couples take a vacation in a country villa. Unbeknownst to them, an archaeologist has summoned forth a group of zombies from a crypt after unraveling the secret of an old Etruscan curse. They soon attack the vacationers, who wall themselves up inside the villa. 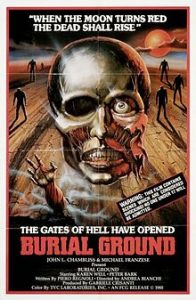 When attempting to describe Burial Ground: The Nights Of Terror, the first words that come to mind are ‘fabulous disaster.’ Upon further examination into director Andrea Bianchi’s 1981 Euro-Trash flick, that phrase seems more than appropriate, especially when considering everything that makes up this bizarre endeavour. It’s the ultimate epitome of a low budget schlock-fest, which in its own way transcends the confines of the b-movie label, to hold distinction in a class all by itself. To put it in simple terms, it’s one of many in the ever-growing catalogue of zombie films. To go into further detail, it stands apart from the herd, and remains an entry incomparable to others in the genre.

When it comes to the storyline and plot, they’re virtually nonexistent, and events seem to occur out of nowhere. It projects the outward appearance of being something that’s hastily rushed without any kind of build up. Within the first few minutes of its running time, we have the undead rising from their crypts to take merciless revenge upon the living. What it lacks in storytelling, it makes up for with unrelenting violence and excessive imagery on every possible level. The end results certainly speak for themselves.

As disjointed as the narrative is, it’s not without its charm. There’s no denying that it’s flawed, muddled, and utterly ridiculous at times—yet it still manages to be wildly entertaining throughout. Accompanying this is the films synth-heavy musical score, which provides ambience that flows with each confusing and blood curdling moment. In a film that’s shoddily pieced together and all over the place, there’s a strange feeling that seems to emanate as it progresses.

As for the zombies featured here, they have a unique appearance to say the least. They’re an odd combination of cheap masks, burial robes, and low budget make up. Like a lot of incarnations of the living dead, they move at slow pace, and are driven by the need to consume human flesh. However, these ghouls demonstrate some very impressive skills with weaponry and other implements of destruction, which even includes a battering ram to gain entry into a building. Like everything else, their cornball appearance is just one of the many glaring elements that give this film its bizarre appeal. 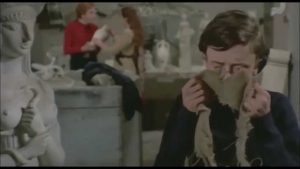 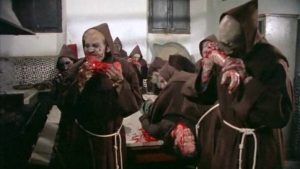 The rest of the cast is relatively forgettable and one-dimensional. They exist for the most part to be done in, provide random scenes of fornication, and stumble around haplessly before meeting their untimely end. However, there’s one member of the cast that provides an absurd amount of unintentional comic relief. Among the group at the estate is a young boy named Michael, who’s supposed to be around ten or twelve years old. In reality, dwarf actor Peter Bark, who was 25 at the time, portrays him. His performance as a “child” is so far from believable that’s it’s actually funny.

When all is said and done, Burial Ground stands on its own as an independent and creative endeavour. It certainly has its share of flaws and moments of utter insanity, yet somehow this works in its favour, rather than against it. It’s always worth a watch, and the appeal hasn’t dwindled in the decades since its release.