Bunny The Killer Thing set to Outrage VOD Viewers in May 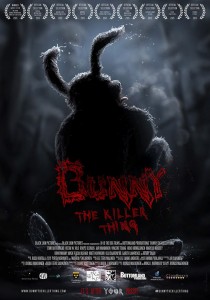 The riotously offensive Finnish horror comedy Bunny The Killer Thing has just arrived on US DVD and Blu-Ray from Artsploitation Films, who have set about building a mightily impressive catalogue of titles of late. In addition, the film will be made available through FilmRise on VOD from May 16th.

If you’ve read the interview with director Joonas Makkonen in the current issue of Scream Magazine, you’ll have some idea of what to expect from Bunny, which features a half-man, half-rabbit creature who goes on a rapey rampage. Artsploitation’s press release only serves to further highlight the film’s less-than-savoury content. Here is an excerpt:

“Naked women (and men) are forced to flee into the snowy wilderness. Blood is soon shed and all kinds of human orifices are violated as the vocabulary-challenged Mr. Bunny (“Pussy!” is the limit of his words) wreaks havoc on the unsuspecting vacationers…Artsploitation’s Ray Murray warns concerned parents and cinematic conservatives that Bunny can be seen as a horribly offensive film that wallows in scenes of rape, gratuitous nudity, bloody murders and all forms of sexual depravity. But for amoral genre film fans it is simply a hilarious, inventive and blood-drenched spoof of monster movies…with gratuitous nudity.”

If you’re still onboard, you can check out the trailer for Bunny The Killer Thing below. A UK DVD release is yet to be confirmed.