Picking Pieces For Your Hellraiser Collection
Clive Barker’s Hellraiser first hit our screens in 1987 and instantly we were sucked into the graphic world of the Cenobites and the mysterious puzzle box. When it came out on VHS, Hellraiser became the pride of every horror fan’s collection. Then followed 10 more movies after this and box sets galore for us to spend our pocket money on. Don’t forget the wheelbarrows full of memorabilia that were produced – hands up who still owns a Pinhead bald cap! With so much to choose from, what should you get to celebrate the glory of Hellraiser?

Be selective with your pieces
It has now been over 30 years since the original movie was released and since then there have been countless re-releases of the full length feature films and the numerous fan films and documentaries. Unless you have a museum, then it’s unlikely that you’ll have space for every edition. Instead invest in some decent box sets and be choosy about your Hellraiser memorabilia, go for quality rather than quantity. If your financial history is reliable, you could get a loan or obtain finance for key pieces and then purchase some items that will always retain their value, such as original Hellraiser film cells, or genuine signed posters. That way you won’t have lost any of your investment if you choose to sell your collection at a later date.

Purchasing your own puzzle box
Lemarchand’s Box features heavily throughout the Hellraiser Series and should be part of your collection. Their box was actually made and designed by Simon Saych, one of the members of the creative team from the first movie. The solution to the puzzle acts as a bridge to another realm – hotly debated to be Christian hell. There are numerous puzzle box versions on the market and even a Hellraiser Rubix cube. Some of the most expensive ones, signed by Clive Barker and Doug Bradley will set you back several hundred pounds. Just make sure that they are the genuine article before forking out the big bucks. 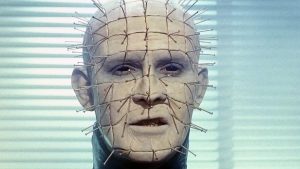 Considered to be the original and best, the first three movies have been released together as a box set many times over the past thirty years. In 2016 Arrow Distribution released their Hellraiser Trilogy Box Set on Blu-Ray and DVD and it is beautiful. Not only is the external sleeve and artwork stunningly reproduced, but the movies have had new 2k restorations. If you are venturing into the later movies, then 1-9 were released as a 25th anniversary edition box set by E1 Entertainment – it’s certainly good to see them all in one well-produced package.

So what are you waiting for? Enjoy a bit of classic horror and let Pinhead, Chatterer and Butterball take you to another realm. After all – they have such sights to show you!