A brutal, funny and bloody trailer has been released for Victor Crowley, the fourth film in the Hatchet franchise. Set a decade after the events of the first film, Victor Crowley is resurrected and heads out on another bloody killing spree. 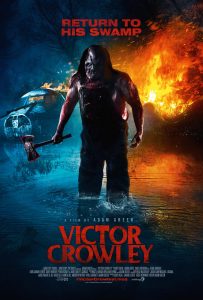 In 2007, over forty people were brutally torn to pieces in Louisiana’s Honey Island Swamp. Over the past decade, lone survivor Andrew’s (Parry Shen) claims that local legend Victor Crowley (Kane Hodder, Friday the 13th series) was responsible for the horrific massacre have been met with great controversy. But when a twist of fate puts him back at the scene of the tragedy, Crowley is mistakenly resurrected and Andrew must face the bloodthirsty ghost from his past.

The trailer shows Victor Crowley’s latest victims, including Andrew who has to return to a place he vows never to return to. Who knew that money could talk? The trailer showcases the film’s violent side, but also the tongue-in-cheek, humorous aspect that the Hatchet series does so well to showcase.

Check it out below and be sure to catch Victor Crowley when he is unleashed on DVD, Blu-ray and VOD on 6th February 2018; courtesy of Dark Sky.