Bruce Campbell is Bloody in new Pic from Ash vs. Evil Dead

A new behind-the-scenes image has been revealed from Ash vs. Evil Dead and it shows the star Bruce Campbell looking a bit worse for wear. He is drenched in blood – possibly his own, but most likely to be from someone or something that has got in his way. 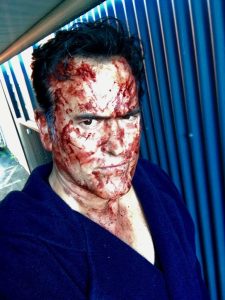 Taking to Twitter, Campbell post the picture with the caption, “You should see the other guy.” So, that confirms that he has been dishing out some bloody torment on someone that, hopefully, deserves it.

Ash vs. Evil Dead will be returning to our screens this autumn with a new showrunner in Mark Verheiden (Daredevil, Hemlock Grove, Falling Skies) and the cast that further includes Arielle Carver-O’Neill, Ray Santiago, Dana DeLorenzo and Lucy Lawless.